In september 2013 we were asked by the research and innovation department of the "VRT" to develop a second screen application to show Instagram feeds during the "Carte Blanche" show.  The editors of the show would select an Instagram feed and show the images in a slideshow on one of the 7 screens in the studio behind the presenters. Sadly enough, poor ratings canceled the show and our development as well. Nevertheless here is the first episode of the show. (Check the screens in the background). The second show we added a live import of Facebook pictures. App description:

Luckily good products sell themselves. Studio Brussel got word of "the Instagram wall" and got in touch with us 2 weeks before the "Music for Life" show (MFL13). This time, the app would have to run for a week instead of a couple of hours, so focus on stability was key. Our analysis of the last version pointed out points of improvement.

We decided to drop SockJS and go with socket.io because it would give us an event-based structure over the whole application from front to back. We switched to the authenticated side of the Instagram API, which would give us more control over the pull requests. We changed the UI for their specific setup and added more fallbacks in case of network or server failure. We removed the underperforming Raspberry pi's and switched them for a decent desktop client with an optimised linux install. They requested a way to load their own images as a feed into the app. We chose Dropbox as an easy alternative for their photographers. Koen took care of the  Instagram api integration and the new Dropbox feature as saving the images on our Node server. Toon took care of the UI, client-side and the complete interaction between server and clients through WebSocket. Koen G. was responsible for setting up the desktop clients. 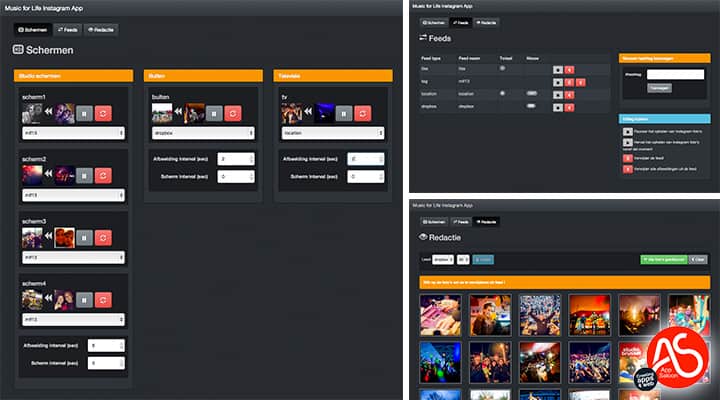 We went on site for installing all the clients and setting up the network. We tested the application together with the editors while explaining them how to use it. Because of the intuitive UI, no training was needed and the editorial team got to focus on their main tasks while quickly changing the feeds on the screens if needed. 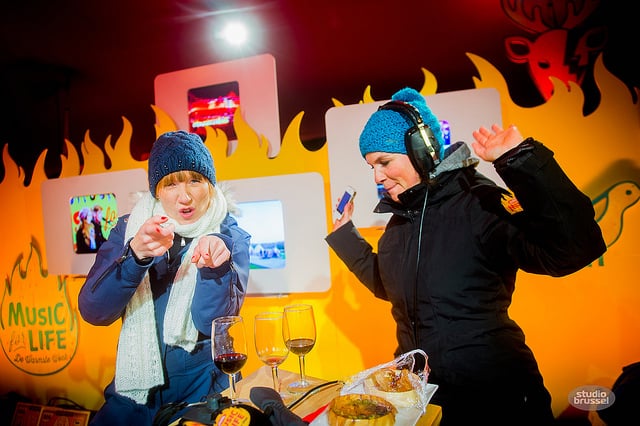 The show went live and the Instagram wall kept on running for 7 days. Even when the network went down, the screens changed to fallback mode and looped through the last 20 images.